We build maneuverable, Coast Guard Certified passenger carrying launches designed for commercial or private use
Call or email Matt Gineo to inquire about new or used launches
401-662-0082 - mattgineo@gmail.com
​All new & used launches come with a valid USCG Certificate of Inspection 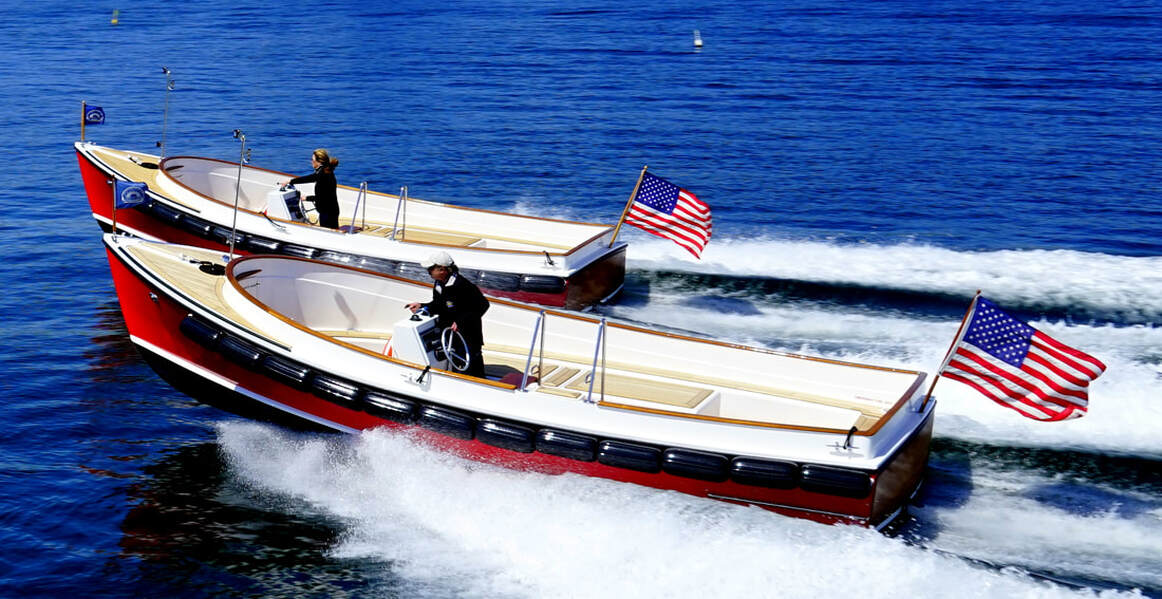 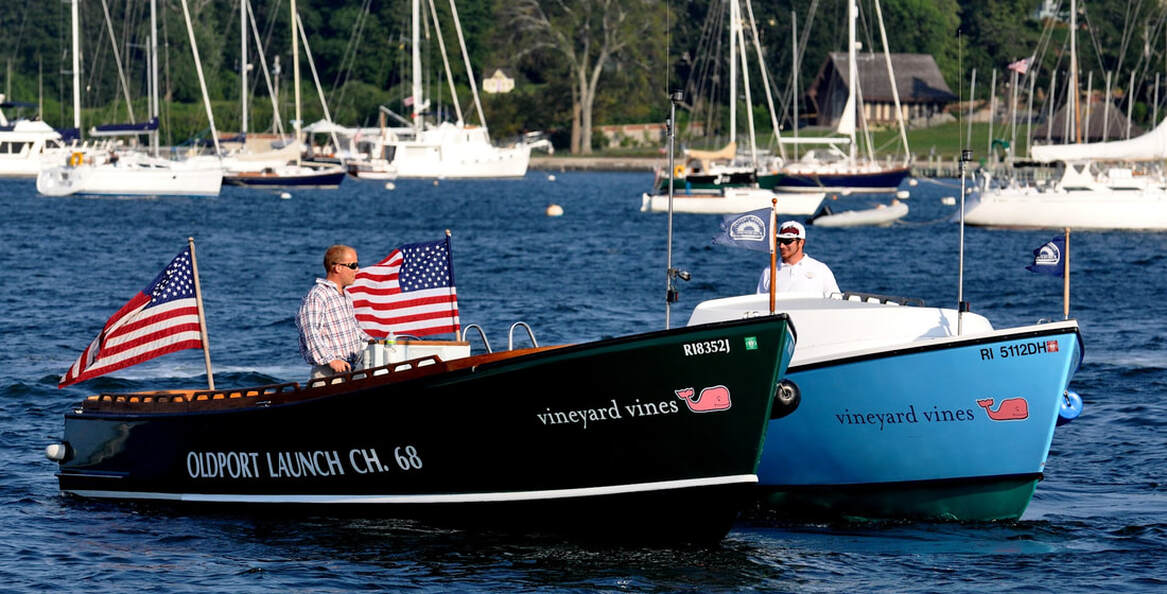 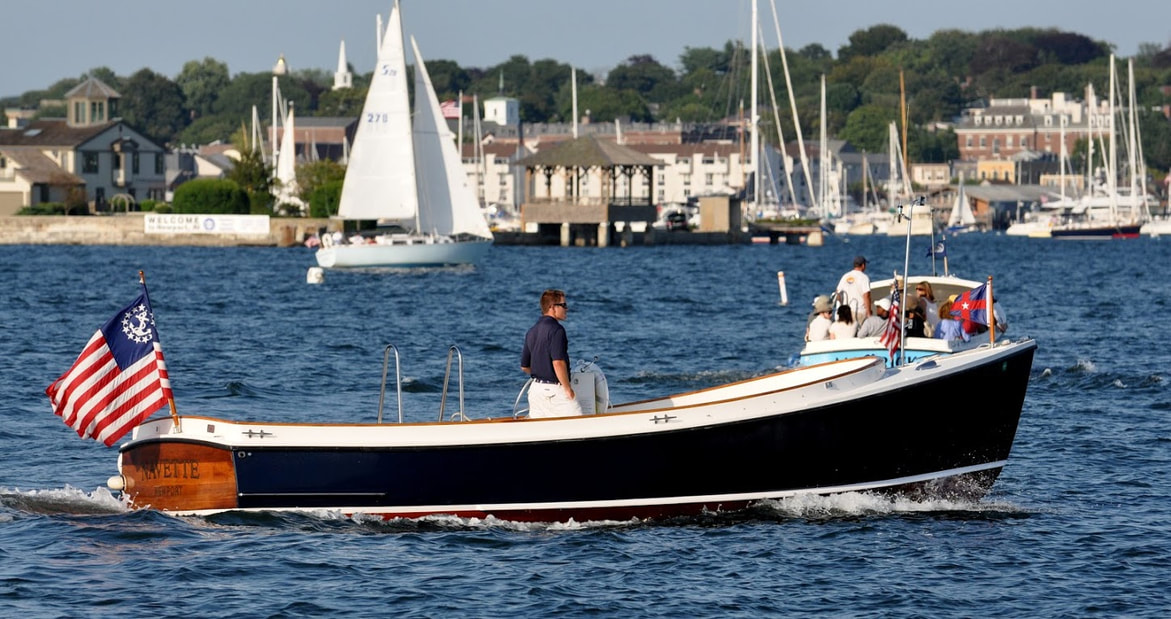 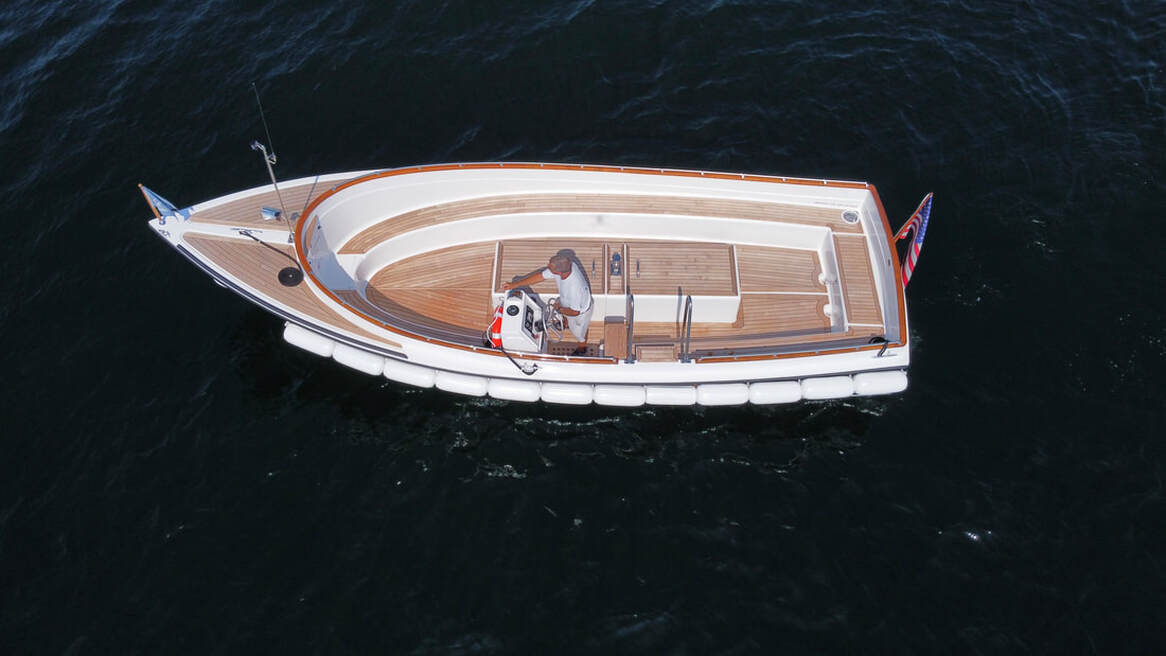 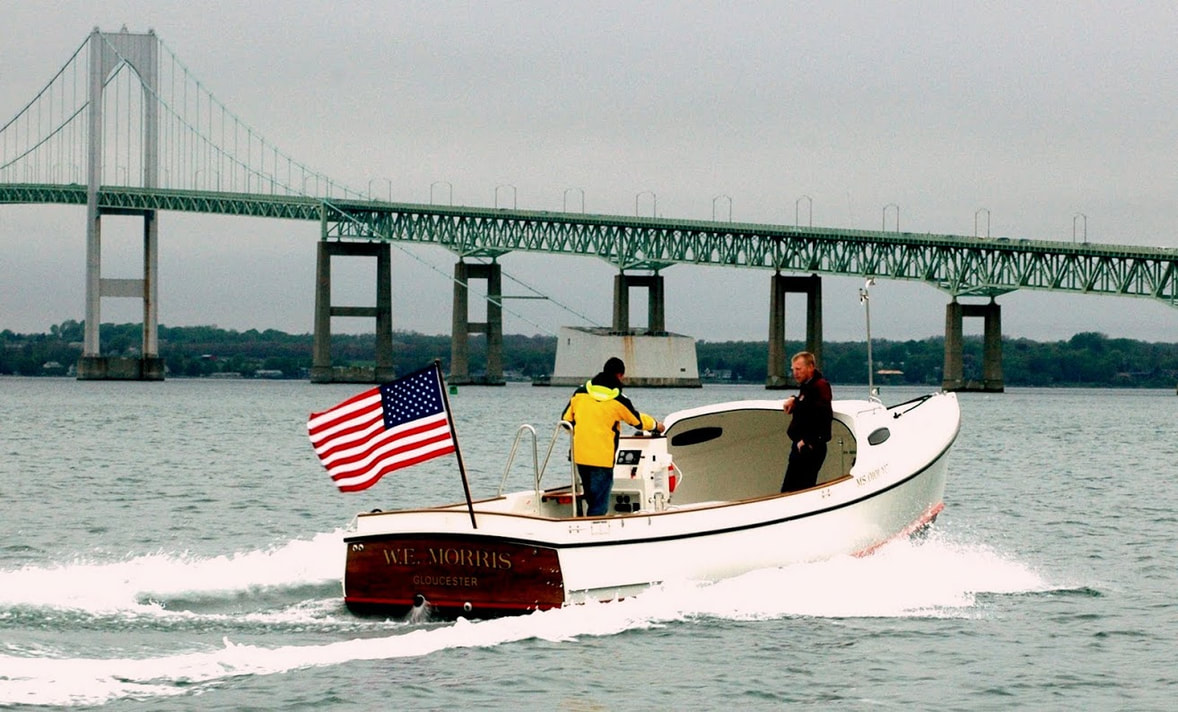 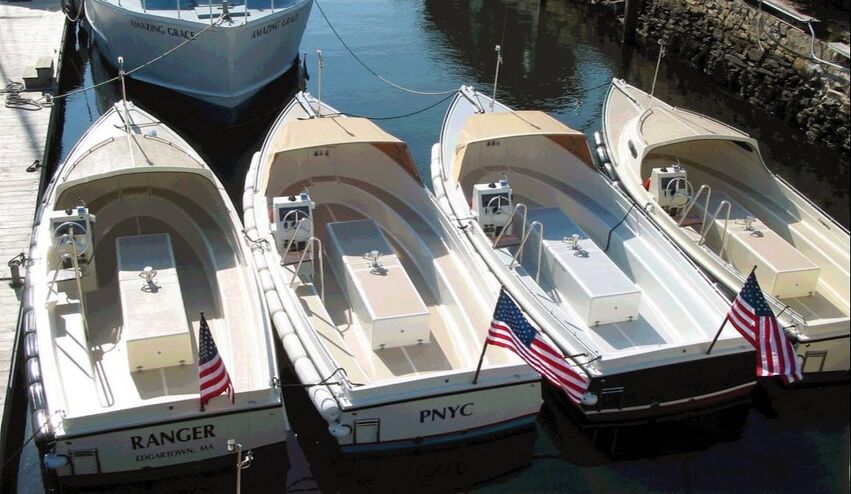 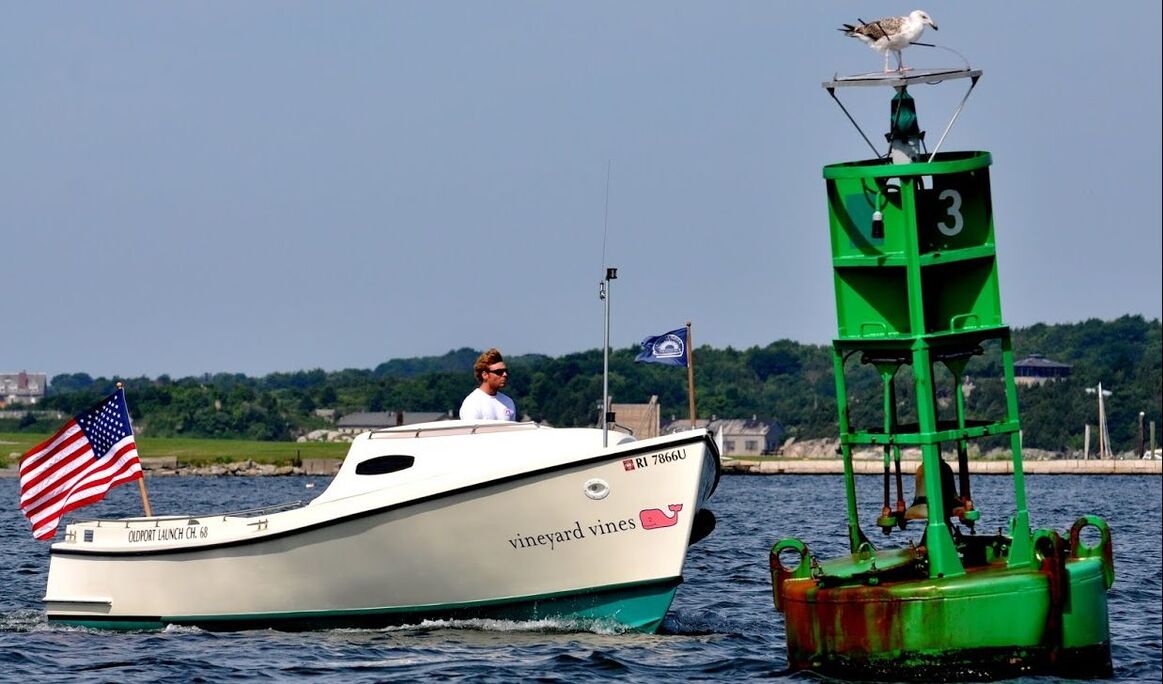 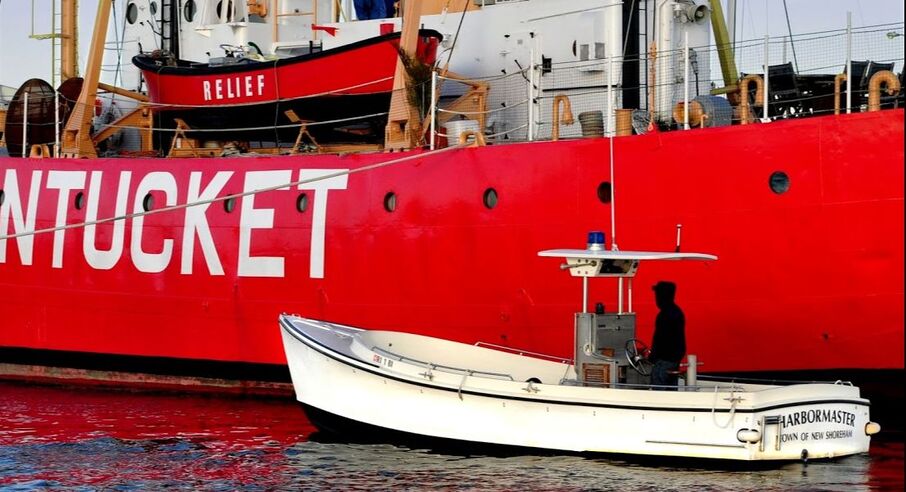 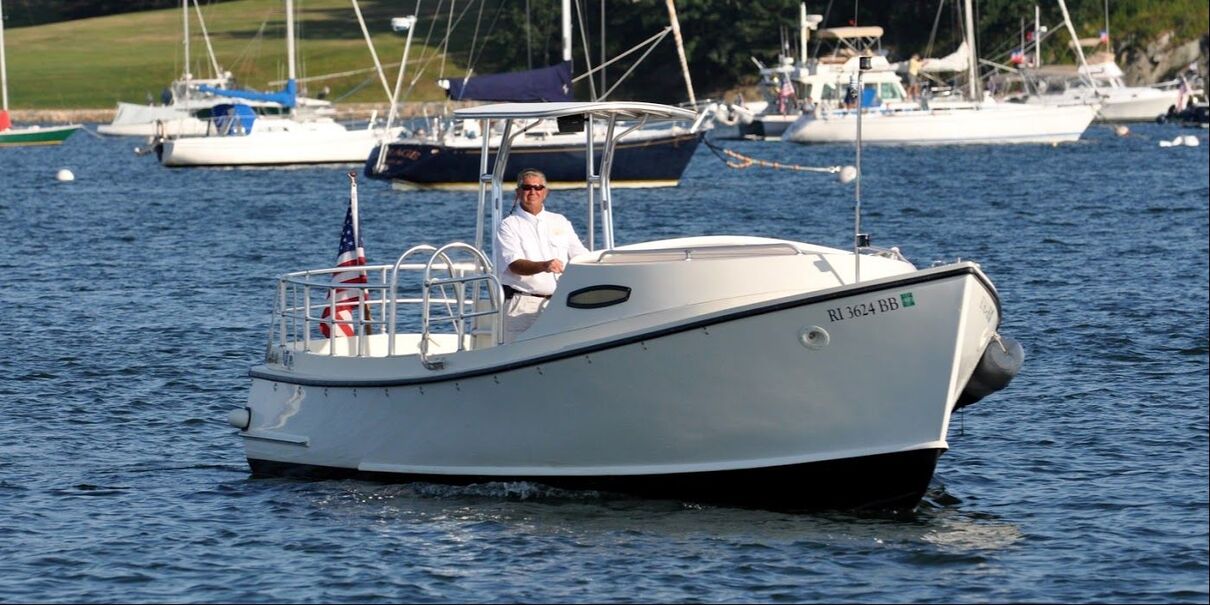 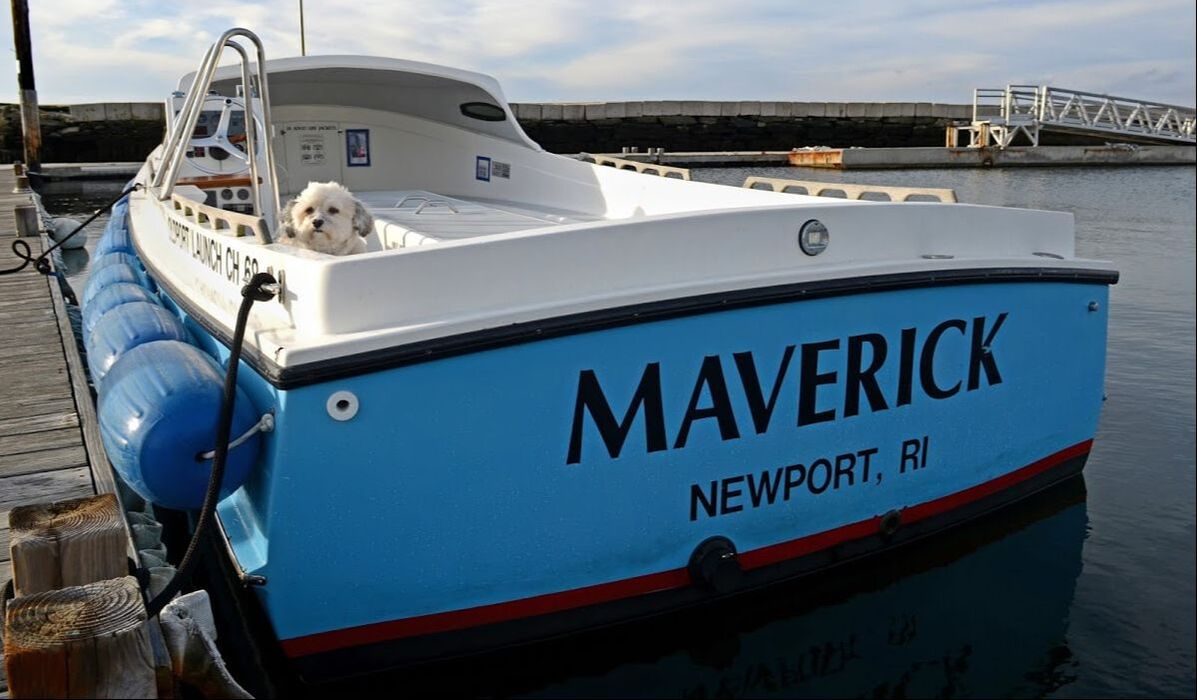 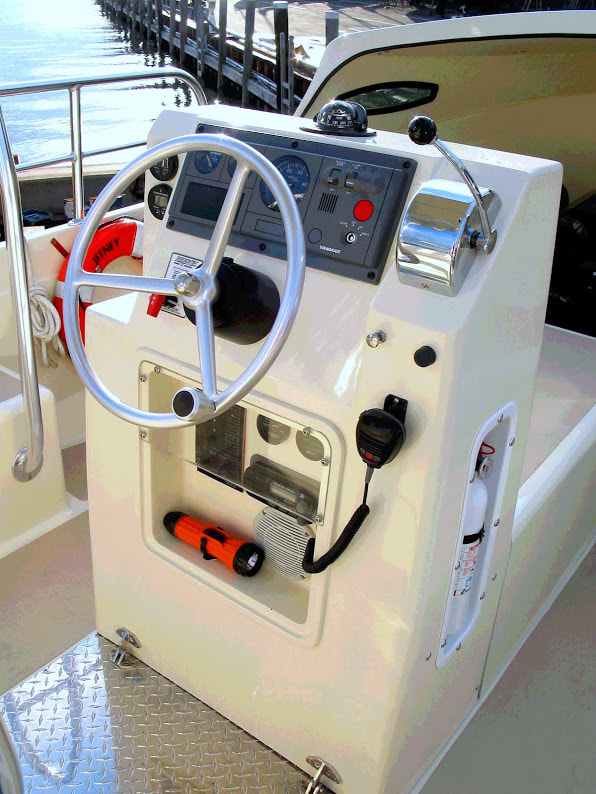 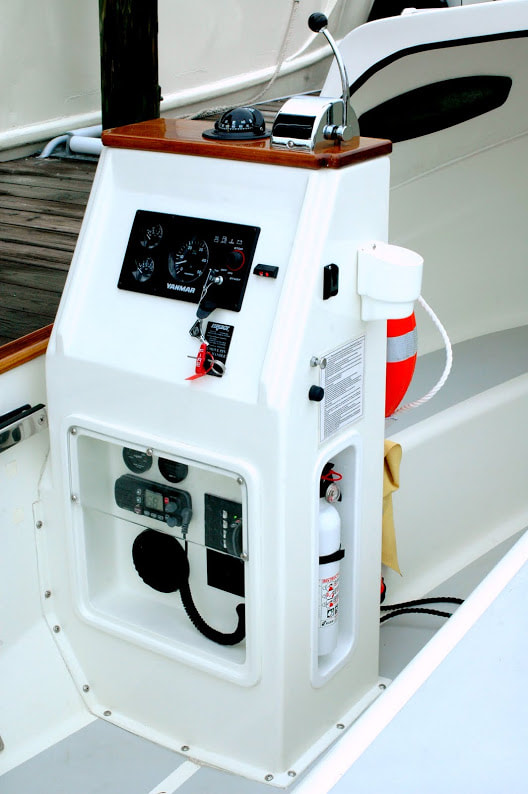 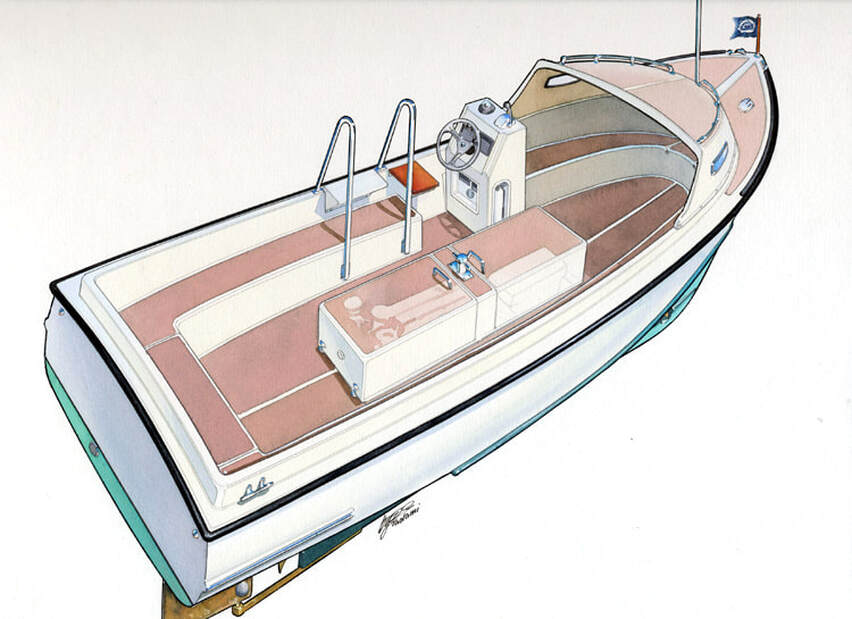 A History of Oldport Marine Launches

In the early 80’s, partners Mike Muessel and Ron Ackman were having trouble keeping up with a booming trade in launch and mooring services in Newport, RI. Oldport Marine had a fleet of three utility boats to handle 100 moorings and seven launches to ferry customers around Newport Harbor. But as demand for their services grew, the partners realized that they’d have to upgrade their launch fleet.

The trouble was that the launches then being produced were, to their minds, too ungainly for efficient business, especially in a large, busy harbor. Most were underpowered, full-displacement boats; they wallowed through wakes and chop, they weren’t maneuverable enough in tight quarters, and they couldn’t carry enough passengers. Muessel and Ackman wanted a boat with exactly the opposite characteristic; something relatively light and maneuverable, with a semi-displacement hull, large carrying capacity, and enough power to carry a full load at a fast clip. So they decided to build such a boat themselves.

After a long search through the boatyards of New England, Ackman came across a mold for a 26-foot workboat not far from home, in Portsmouth, RI. The mold had been out of service for several years, but it caught his eye and he decided to investigate.

The mold turned out to have been built in the early 1970s by Newport Shipyard. It was a scaled-down version of a mold for a Wasque 33, a general-purpose bass boat, built and owned by Martha’s Vineyard Shipyard. The lines for the Wasque had been taken originally from a Maine lobster boat.

The shape the Oldport partners saw in the mold more than suited their purposes. It showed a boat with traditional lines; a graceful shear with a high, flared bow, moderately high topsides with splash rails and slight tumblehome aft, and wide beam carried to the transom. Underwater, the V-sections carried in a flat, clean run aft, with soft chines and a small keel. “We were looking for an easily driven, good-looking boat that had a decent carrying capacity,” says Muessel, “and this was it.”

Muessel and Ackman rented the mold and set up a building arrangement with C.E. Ryder in Bristol, RI who produced a hull for them in December of 1984. This was to become Dispatch, the first Oldport 26. Muessel made a few modifications to that hull, primarily by adding length to the keel, and then set about fashioning a deck and interior suited for comfortable, short-haul passenger carrying. The result was a launch that had a short, high foredeck with stowage underneath, and a big open cockpit with high coamings and a nicely rounded forward end. A continuous seat ran around the perimeter from quarter to quarter. There was a long engine box amidships with stowage in the after end. The steering console was to port, with the fuel tank to starboard to offset the weight of console and operator.

The launch was powered by a four-cylinder, 44 hp Yanmar diesel. With a full load of 27 passengers, Dispatch could make about ten knots. Unloaded, she could do thirteen knots, leaving very little wake. She was also highly maneuverable at all speeds, and had a low-speed turning radius better than most shorter launches.

Meanwhile, Ryder was at work producing a second hull, which emerged from the mold in March of ’85. This boat was called Tango and as soon as she hit the water she was the talk of the town. Her deck and seating arrangement were the same as those in Dispatch, and she had received the same keel modifications. But she had console steering amidships, aft of the main engine box, and in the engine box Oldport had installed a small volcano – a 66 hp turbocharged Yanmar that produced 50 percent more power than the 44 standard.

“We didn’t have a speedometer rigged the first time we took her out for sea trials,” says Muessel, “but we did take along a radar gun. The turbo-charge kicked in at about 2500 rpm and she started planing at 2900. At full throttle we pointed the radar gun at a buoy we were passing, and got a speed of eighteen miles an hour – about fifteen and a half knots. We were putting up almost no wake, and we had good control – the steering was very positive. We put her into hard turns at full speed, and she stayed flat and stable.”

Tango immediately became a sort of working showboat for Oldport Marine. In addition to running reliably day and night in Newport Harbor as a passenger launch, she was fast and seaworthy enough to make the 20-mile run out to Block Island for major sailing events, to ferry supplies around Narragansett Bay, and to act as a medium-capacity towing launch.

For two weeks in May of 1987 she played a highly visible role in the finish of the BOC Singlehanded Around the World Race. As the racers called in on their approach to Brenton Tower, Tango would cast off and make the five-mile dash out to at the finish line with a cargo of journalists and TV crews, race officials, and family members. Often she’d take the 50- to 60-footers in tow and bring them into Newport.

“The first couple of boats from the original mold were idea boats,” says Muessel. “We did the interiors with fiberglass-covered marine plywood, and for steering, engine access, weight distribution, stowage, and so forth. By the time we’d lived with Tango for a while, we knew of a few more small changes we wanted to make.”

In March of 1986, Liberty’s hull came out of the mold at C.E. Ryder. At the Oldport shop she was fitted, like Dispatch, with a portside console and extended engine box. She also incorporated the basic changes the partners wanted: “We extended the keel and gave it a little more draft so that an external shaft strut wasn’t needed anymore” says Muessel. “It also gave us a way to extend a skeg from the aft end of the keel to help support the rudder and protect the propeller. The bigger keel gave her even better tracking ability than Tango, but didn’t seem to hinder her turning ability.”

By now, Dispatch and Tango were attracting considerable attention, and Oldport was getting inquiries from yacht clubs. Muessel and Ackman saw no harm in trying a limited production run, and they decided to use Liberty as the basis for a new set of molds. After making a few more minor changes inboard, they turned the boat over to Peter Van Lanker of C. E. Ryder, who over saw the final tooling of the plugs and production of the molds.

Within twelve months, there were twelve new launches; Foxtrot went into service at Oldport, and the next few went to the Noroton Yacht Club in Connecticut, the Manhasset Yacht Club and Oyster Bay Marine Center of Long Island; to Pickering Wharf in Salem, Mass., and to the Block Island Harbormaster.

Since then, the builders at Oldport Marine have just managed to keep a lid on their production run. On a given day there are two or three Oldport 26 hulls being fitted with decks, interiors, engines, and hardware, with new hulls arriving from C&C Fiberglass once a month. As of May 2005, 123 of the launches had been built.

The basic dimensions of the Oldport 26 have remained the same since Liberty – an overall length of 25’ 10”, beam of 9’ 2”, draft of 3’, and a dry weight displacement of 5000 lbs. The standard launch comes with the portside steering console and the four-cylinder Yanmar 44 hp diesel. (Yanmar recently upgraded their engine ratings, so the 44 is now called a 50.) The boats are all hand laminated to U.S. Coast Guard specifications, and each receives a USCG inspection certificate. Other standard features include stainless boarding rails and teak handrails, non-skid decks, beefy hardware, and a full set of fenders rigged on the portside.

The Oldport 26 engine compartment can accommodate anything from the standard 44 (50) up to a behemoth 140 horsepower. Juliet, for example, a side-console model recently launched for service with Oldport, carries a turbo-charged 72hp Yanmar, which runs her at 16.7 knots. She’s also fitted with a new waterproof electrical switch panel, interior courtesy lights, a cuddy cabin, and towing post.

Those original “idea boats” are still operating: Dispatch now has over 54,000 hours of service under her belt; Tango about 60,000 hours. The early experiments with those two boats formed the basis of an impressive option list: launches are offered with different engine sizes, center consoles and helmsman’s seats, towing posts, cuddy cabins or soft dodgers, extra flotation, and complete USCG Certification Packages. On the other hand, the hull-shape itself is so versatile that Oldport has begun receiving requests for bare hulls to be fitted out for other purposes – as bass boats, fishing boats, and family pleasure boats.